Press forward. Do not stop, do not linger in your journey, but strive for the mark set before you.- George Whitefield

Researchers at the Agharkar Research Institute (ARI), Pune, an autonomous institute under the Department of Science &Technology, Govt. of India, have developed a sensitive and low-cost sensor to rapidly detect bacteria.

For PRELIMS it is important to understand the principle and working of bug sniffer !

For MAINS do you think bug sniffers like gear could be manufactured for viruses too ? If yes then how should be this crowdfunded ?

On applying an external magnetic field, the bacteria attached to the peptide were isolated and immobilised.

Peptides, which are highly specific to the bacteria to be detected, have extremely low cross-reactivity.

The conventional techniques available for pathogen detection are less sensitive and cannot detect low cell numbers, besides being time-consuming and laborious whereas the ARI device, can detect pathogens with a limit of detection of 10 cells per 1 mL within 30 minutes.

The bug sniffer is affordable, and the raw materials required for making it are readily available.

Indian Naval Hospital Patanjali at Karwar has been at the forefront of the fight against COVID-19, by treating the patients from the Uttara Kannada district.

For PRELIMS this is not an important issue but still we had to cover it ! Map them out .

Acting on a request from the Karwar District Administration upon announcement of nation-wide lockdown on 25 Mar 20, INHS Patanjali was prepared in every aspect within 24 hours to receive the first group of COVID-19 positive patients on 28 Mar 2020.

Out of the nine patients admitted at the hospital, eight have been cured and discharged so far.

INS Patanjali has made alternate arrangements for routine medical attention to the large population of service personnel and families dependent on the hospital.

For PRELIMS it is important to understand the concept of Black Hole and AGN ! This can be asked in Prelims 2020.

Researchers from the Indian Institute of Astrophysics (IIA), Bangalore, an autonomous institute of the Department of Science & Technology, Govt. of India, have conducted the first systematic study on the gamma-ray flux variability nature on different types of blazars.

Blazars are AGN whose jets are aligned with the observer’s line of sight.

The results obtained from this particular piece of work will provide key inputs to the problem of finding the high energy gamma-ray production site in blazars.

Projected paths of the pandemic

For PRELIMS it is important to understand the relation between COVID-19 and algebra ! Yes they are inter related .

For MAINS do you think this uncertainty will follow till the vaccine comes into existence ? What are your thoughts on possible sine curve graph for such pandemic ?

If a sick person infects two others in a day, there will be 16,000 cases after 14 days.The infection rate, though varies from country to country, is higher for COVID-19, suggesting a steeper infection curve. 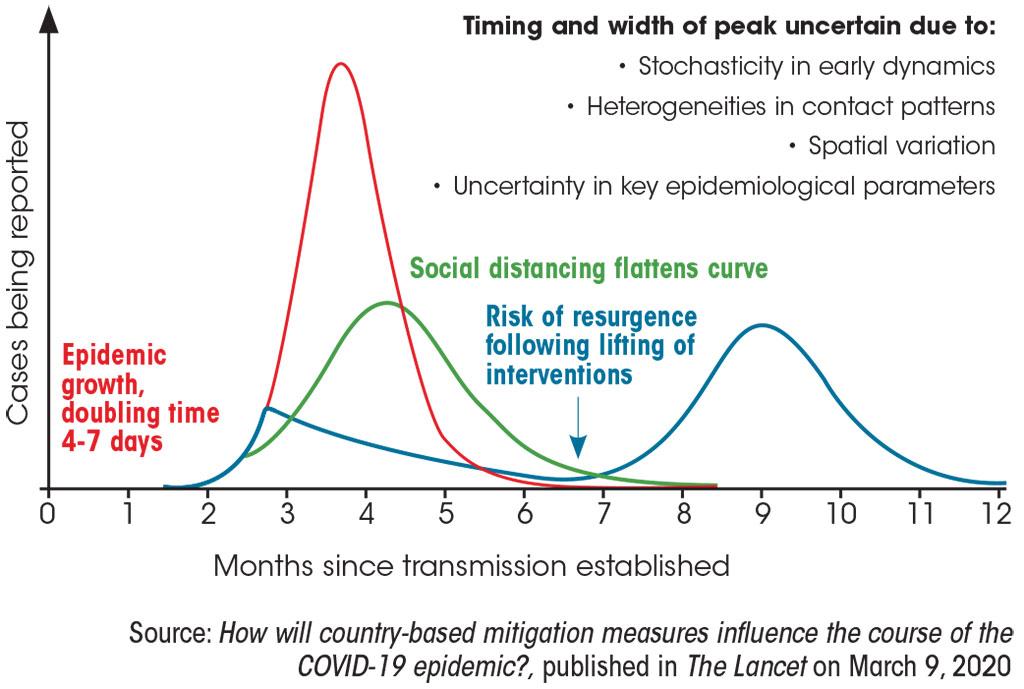 But there will still be the risk of resurgence once interventions are relaxed. Interventions like social distancing may thus need to be in place until a vaccine is developed—after 18 months or longer.

Flattening the curve can help reduce the rate of transmission.

What is Blazar emission ? Let us discuss | UPSC