A game changing and unique project aimed to transform 5 crore Tribal Entrepreneurs under the name “Tech for Tribal” has been launched by TRIFED.

For PRELIMS go through aim, objective and the fundamentals of this initiative.

For MAINS look out for some marketting opportunities and more capacity building solutions specifically for Indian tribes.

It was launched on 19thMarch 2020 by TRIFED and IIT-Kanpur along with IIT-Roorkee, IIM Indore, Kalinga Institute of Social Science, Bhubaneshwar and SRIJAN, Jaipurin the first phase of organising tribal entrepreneurship and skill development program.

Tech for Tribals, an initiative of TRIFED supported by Ministry of MSME, aims at capacity building and imparting entrepreneurship skills to tribal forest produce gatherers enrolled under the Pradhan Mantri VanDhan Yojana(PMVDY).

The trainees will undergo a 30 days program over six weeks comprising 120 sessions.

“TRIFED received overwhelming response from all leading higher education institutions in the country for strategizing to infuse best in class training and capacity building for Tribals to start their enterprise.

Working towards greater convergence of various schemes under key Ministries of Government of India, leading national Institutions, Social sector and most of all Industry leaders, and work towards this singular goal of promoting tribal produces in a big way.

This initiative will impact over three lakhs Tribals”.

TRIFED has drawn out a Five Year strategy for 10X impact in Tribal development.

The programme aims to tap into the traditional knowledge and skill sets of tribal people by adding technology and Information Technology for upgradation of output at each stage and to convert the tribal wisdom into a remunerative economic activity.

One typical VDVK comprises of 15 Self Help Groups, each consisting of 20 Tribal gatherers.

THE COURSE CURRICULUM WILL INCLUDE:

TRIFED also has aggressively pursued their eCommerce strategy with their own website (www.tribesindia.com) and is also available on other major e-com portals such as Flipkart, Snapdeal,Paytm, Amazon India, Amazon Global etc.

National Level Tribal Festivals namely Aadi Mahotsavs, along with other exhibitions, are being organised in various cities all over the country are other efforts being takento expand the marketing opportunities for TribesIndia products and country’s tribal heritage.

“All the students, start-ups at our Incubation Centre and alumni will have the opportunity to get directly involved in mentoring Tribal entrepreneurs and help them build sustainable businesses in the districts they operate”

Under the Tech for Tribals program, the Partners will develop course contents relevant to Entrepreneurship in Value Addition and Processing of Forest Produces.

TRIFED over the last three years has revamped itself as a network of 120 outlets across the country of which 72 are owned and operated by TRIFED themselves.

For PRELIMS this scheme is not so important but still we have to go through it. Aim,Objective,Sharing and Beneficiaries.

For MAINS make notes around issues faces by handloom weavers and grievances redressal for the same !

The Ministry of Textiles is implementing converged Mahatma Gandhi Bunkar Bima Yojana (MGBBY) for providing social security benefits like life, accidental & disability insurance coverage to handloom weavers/workers in the age group of 51-59 years across the country, who have already enrolled under the scheme on 31.5.2017.

The basic objective is to provide enhanced insurance cover to the handloom weavers in the case of natural as well as accidental death and in cases of total or partial disability.

To provide the benefits to all handloom weavers/workers in an effective manner, the Government of India has organized Hasthkala Sahyog Shivirs in handloom clusters across the country in association with State Governments and LIC for creating awareness among the weavers for enrollment under the Scheme.
[wc_row] [wc_column size=”one-half” position=”first”]

The annual premium of Rs.470/- is shared as under:

1. The weaver should be earning at least 50% of his income from handloom weaving.

2. All weavers, whether male or female, between the age group of 18 and 59 years are eligible .

4. It will be the responsibility of the State Director in charge of Handlooms to verify the eligibility of the weavers who are proposed to be covered under the scheme.

The claim benefits are provided by LIC directly into the bank account of beneficiaries through Direct Benefit Transfer (DBT).

Entrepreneurship in the Country

Development of Entrepreneurship in the Country

MINISTRY?Ministry of Skill Development and Entrepreneurship

For PRELIMS these are just accumulation of schemes related to skill development and entrepreneurship.Nothing to worry about except the relevant ministry !

For MAINS remember these schemes for a long long time ! These will fetch you the most important marks in Main 2020 if supported with a beautiful example.

The scheme envisages creation of 600 new and 1000 scale-up enterprises.

Further, with an aim to promote a culture of entrepreneurship among India’s youth and inspire them to set-up their own enterprises and create employment opportunities for others, a National Entrepreneurship Awards Scheme (NEAS) has been instituted in 2016.

Under the scheme, awards are conferred to aspiring first generation entrepreneurs including women and those individuals/ organizations who are working as eco-system builder in the field of entrepreneurship development.

The awards also seek to highlight model of excellence for others to emulate and improve upon.

ECONOMIC EMPOWERMENT OF WOMEN ENTREPRENEURS AND START-UPS BY WOMEN

Besides,  Ministry of Skill Development and Entrepreneurship (MSDE) in collaboration with the Deutsche Gesellschaftfür Internationale Zusammenarbeit (GIZ) GmbH (Germany) has launched a pilot project called ‘Economic Empowerment of Women Entrepreneurs and Start-ups by Women’ to support aspiring and existing women entrepreneurs in India.

In addition, the Government is providing financial assistance in form of loan to entrepreneurs under various schemes viz Micro Units Development and Refinance Agency or MUDRA

Stand Up India Scheme implemented by Department of Financial Services (Ministry of Finance),

Rashtriya Mahila Kosh(exclusively for women) implemented through Ministry of Women and Child Development.

‘People feel a sense of belonging, trust and enjoy each other’

For PRELIMS you should always remember the method of calculation ! We have mentioned it.

For MAINS suggest measures such that the rankings of poor countries can be scaled up in less time .

World Happiness Report asked people in 156 countries to evaluate their own levels of happiness, and took into account measures such as GDP, social support, personal freedom and levels of corruption to give each nation a happiness score.

As in each of the previous seven reports, Nordic states dominated the top 10, along with countries such as Switzerland, New Zealand and Austria.

The happiest countries are those “where people feel a sense of belonging, where they trust and enjoy each other and their shared institutions,.

Meanwhile, the countries at the bottom are those afflicted by violent conflicts and extreme poverty, with Zimbabwe, South Sudan and Afghanistan classified as the world’s least happy nations.

Finland’s residents enjoy a high quality of life and security, with rates of inequality and poverty among the lowest of all OECD countries.

Finland’s top spot in the happiness list has previously been met with raised eyebrows in the country whose population of 5.5 million is said to shy away from spontaneous demonstrations of joy, valuing instead the quiet and solitude of the country’s vast forests and lakes.

The country’s long dark winters were reputed to be behind high levels of alcoholism and suicide, but a decade-long public health drive has helped cut rates by more than half.

More than 1.8 Lakh teachers have already been trained under ARPIT in just two years. 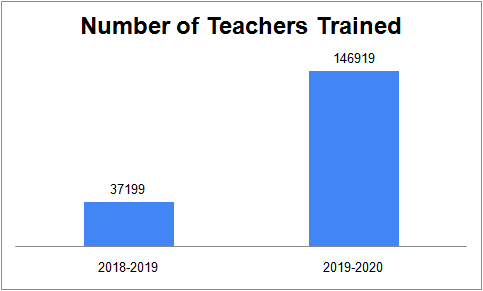 In a unique initiative to enhance quality of teaching in higher education.

Using the MOOCs platform SWAYAM, the programme was launched in 2018 to fulfil government’s  commitment towards quality education. I

t is a major and unique initiative of online professional development of 15 lakh higher education faculty.

Through ARPIT, new & emerging trends, pedagogical improvements and methodologies for transacting revised curriculum have been imparted to more than 1.8 Lakh teachers in the last two years.

In 2018-19, 37199 teachers were trained under this program whereas in 2019-20 the number has increased tremendously to 146919 which shows a nearly fourfold increase as well as popularity of the programme.

Teachers are the base of education system and ARPIT is a great platform for teachers to learn about latest developments in their field and develop their teaching qualities.

It encompasses both enhancing the quality of teaching as well as learning experience.

An adult leopard, which had caused a panic among local residents, was rescued by the Maharashtra Forest Department and Wildlife SOS from a farmhouse in Shirur in Pune district on Thursday.

The Indian Leopard has larger rosettes than the other subspecies, with a paler coat in desert habitats, greyer in colder climes and more ochre in rainforest habitats.

Like other leopard subspecies, the pattern of rosettes is unique to each individual and can be used to tell them apart.

They are sexually dimorphic, with males larger and heavier than females.

It is estimated that 12,000-14,000 leopards occur in India, and the population is the most genetically diverse/outbred out of all the subspecies in Asia.

However, the population has been severely affected by poaching for skins and body parts for the illegal wildlife trade; there were more than 3,000 leopards poached in India between 1994 and 2010.

The latest IUCN assessment, which groups all leopard subspecies together as Vulnerable, recommends a full assessment of the Indian Leopard population, as there may now be fewer than 10,000 mature individuals.

The Indian leopard (Panthera pardus fusca) is a Schedule I species, protected under the Wildlife Protection Act, 1972 .

All About Coronavirus Vaccine | COVID-19 | Updated |