Section 144 not a tool to suppress opinion: SC

For PRELIMS know the historical background and facts associated with section 144.

For MAINS compare the evolution of section 144 with respect to colonial era.

The orders of restriction issued under Section 144 of the Code of Criminal Procedure (Cr.PC) could not be used as a tool to suppress legitimate expression, opinion and grievances in a democracy

“If a government thinks there is a threat to law and order, it [wc_highlight color=”yellow” class=””] must follow due procedure, taking into consideration the rights of citizens, and pass only appropriate and need-based restrictive orders[/wc_highlight] ,”.

Divergent views and disapproval of government action could not lead to imposition of Section 144.

The power was meant to be used only in case of public emergency or in the interest of public safety.

Magistrates could not apply a straitjacket formula without assessing the objective and material facts.

Restrictions could not be excessive in nature or duration.

On the contention whether Section 144 could be invoked against the public in general or against specific groups or persons, the court referred to the Madhu Limaye judgment that a general order could be passed if the number of persons was so large that a distinction could not be made without risk.

For PRELIMS understand the role of this department .

The Ministry of Defence (MoD) has approved the rules of business for the newly created Department of Military Affairs (DMA), headed by the Chief of Defence Staff (CDS)

The DMA, headed by Gen. Bipin Rawat, will have:

TRAINING POLICY:  Most of the training establishments and cadre management of the Services would be under the purview of the DMA

DEPUTATIONS: Training establishments, such as the National Defence Academy, the Indian Military Academy, the Officers Training Academy and the Defence Services Staff College would also be under the CDS.

Defence diplomacy of the neighbourhood countries would also be under the CDS.

Cadre review of Junior Commissioned Officers and Other Ranks will be looked after by the CDS.

CDS is also  a Secretary in the MoD.

The Services have been brought under the ambit of the DMA, in addition to the Territorial Army and works relating to the three Services and procurement exclusive to the Services, except capital acquisitions.

The prime post of CDS should have been on rotational basis such that grievances of all the three forces would be under consideration after a point of time .

For PRELIMS understand article 19 and its importance in democracy.

For MAINS some points have been collected to support with the answer for right to freedom of expression.

The Supreme Court on Friday ordered the government to review “forthwith” any existing orders that restrict basic rights and free movement in Jammu and Kashmir. 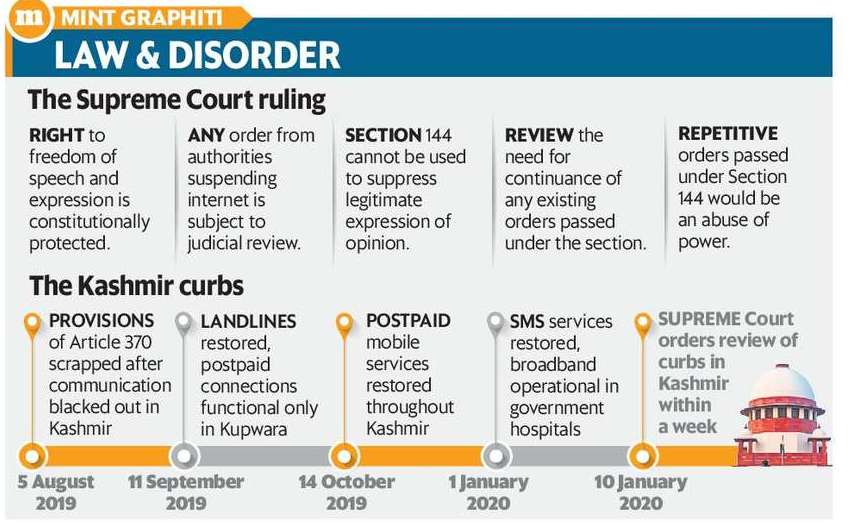 The court upheld the freedoms of free speech, expression and trade or business on the Internet as fundamental rights to be constitutionally protected.

It, however, refused to express any views on whether the very access to the Internet is a fundamental right or not.

It further instructed the government to consider restoring government websites, localised/limited e-banking facilities, hospital services and other essential services in areas in the Union Territory, where it was otherwise not thinking to do so immediately.

Publication of these orders would now enable the affected persons to challenge their legality in the Jammu and Kashmir High Court or before any other appropriate forum.

The Supreme Court on Friday rejected the argument of the Jammu and Kashmir government that it opted for a blanket suspension of Internet services in the Valley because it lacked the technology to allow selective online access.

“If such a contention is accepted, the government would have a free pass to put a complete Internet blockage every time. Such complete blocking/prohibition perpetually cannot be accepted by this court,” .

But the court made it a point to observe that peace in J&K should be achieved without “excessively burdening” the fundamental right of free speech.

It held that a restriction imposed on fundamental rights without appropriate justification was disproportionate.

The goal behind a restriction should be legitimate.

The degree and scope of a restriction should be proportionate to what was actually necessary to combat an emergency.

The State should resort to the least restrictive measure while taking into consideration the facts and circumstances. A restriction should be supported by sufficient material and amenable to judicial review.

However, SC noted that there was “ample merit” in the government’s argument that Internet could be used to propagate terrorism in J&K, thereby challenging the sovereignty and integrity of the nation.

Occupancy in the prison has lowered by over 70% since 2015: NCRB report

For PRELIMS nothing much except some stats which are least important

For MAINS this issue is very important with respect to prison reforms.

The occupancy rate in Tihar jail has lowered by over 70% since 2015, but the issue of overcrowding in the prison is a problem that persists, Prison Statistics released by the National Crime Records Bureau has stated. In 2018, the capacity of Tihar jail was 10,026 and the number of inmates .

Overcrowding in prisons leads to:

In the recent years, overcrowding is one of the biggest problems being faced by prison inmates.

Gulls or seagulls are seabirds of the family Laridae in the suborder Lari.

Gulls are typically medium to large birds, usually grey or white, often with black markings on the head or wings.

Most gulls are ground-nesting carnivores which take live food or scavenge opportunistically, particularly the Larus species.

Gulls are typically coastal or inland species, rarely venturing far out to sea,.

All set for waterbird census in A.P.

For PRELIMS note down important points about Indian skimmers

For MAINS such census results are quite important . Keep an eye !

The annual bird census will commence in the Corniga Wildlife Sanctuary (CWS) and surrounding wetlands in the Godavari mangrove cover on the east coast from Saturday.

Coringa Wildlife Sanctuary is 18 km from the port city of Kakinada, on the Kakinada-Yanam state highway in Chollangi Village, nestling on the deltaic branches of Gouthami and Godavari Rivers at Kakinada Bay.

The sanctuary is a part of the Godavari estuary and has extensive mangrove and dry deciduous tropical forest.

About half of the area is the backwater, which includes a sand pit of 18 km length. The rivers Coringa and Gaderu and their deltaic branches intersect the region, along with other water channels. This forms about 335.7 square km of marsh vegetation. 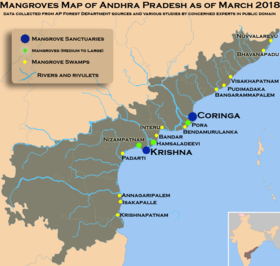 “Indian Skimmer, a waterbird species, has started visiting the Godavari mangroves for three years. The species can be sighted only in three places in the country, including the Chambal river in Central India.

The census will document such incredible findings of the avian life surviving in the Godavari mangroves.

The conservation status of the Indian Skimmer is ‘vulnerable’, according to the Red List of the International Union for Conservation of Nature and Natural Resources.

AIM : “The census aims at documentation of migratory and resident birds to be able to prepare a better management plan of the complex ecosystem that supports the waterbird species.

According to Forest department authorities, at least 50 personnel — research scholars, volunteers, and bird watchers — will conduct the census.

BIRD COUNT: The entire crew will be divided into the 14 groups for carrying out the bird count.

It will give us a picture of its present state and results of the conservation being done in the wildlife sanctuary and outside.

For PRELIMS know what is the aim and features of I4C

The I4C is a seven-pronged system, which includes a cybercrime reporting portal, analysis of threats, capacity building, research and innovation, creating an ecosystem for cybercrime management and a joint cybercrime investigation platform for law enforcement agencies.

The project was approved in October 2018 at an estimated cost of ₹415.86 crore, the Ministry of Home Affairs (MHA)

Citizens can report any kind of cyber crime irrespective of the place where it has occurred through the website.

So far, more than 700 police districts and more than 3,900 police stations have been connected with this portal, the MHA said.

For PRELIMS this is a very important RBI featured schema .

For MAINS well , Less cash society vs digital India campaign has to be studied.

The Reserve Bank of India (RBI) has chalked out an ambitious strategy for financial inclusion till 2024, in which it aims to strengthen the ecosystem for various modes of digital financial services in all Tier-II to Tier VI centres to create the necessary infrastructure to move towards a less-cash society by March 2022.

One of the objectives of the strategy includes increasing outreach of banking outlets of to provide banking access to every village within a 5-km radius or a hamlet of 500 households in hilly areas by March 2020.

RBI said that the aim was also to see that every adult had access to a financial service provider through a mobile device by March 2024.

With the aim of providing basic of financial services, a target has been set that every willing and eligible adult, who has been enrolled under the Prime Minister Jan Dhan Yogana, be enrolled under an insurance scheme and a pension scheme by March 2020.

The plan is also to make the Public Credit Registry (PCR) fully operational by March 2022 so that authorised financial entities could leverage the same for assessing credit proposals from all citizens.

Financial inclusion is increasingly being recognised as a key driver of economic growth and poverty alleviation the world over.

This Ayurvedic powerhouse has been “discovered” by beauty brands as the natural alternative to retinol. This is big news. Chemical retinoids are the biggest and most credible story in anti-ageing, with proven results (collagen boosting, anti-wrinkle, anti-pigmentation) in the beauty business.

For PRELIMS concentrate on the significance of this plant.

If the adaptogen ashwagandha was the trending herb in the beauty and wellness world over the last few years, it is now the turn of babchi. 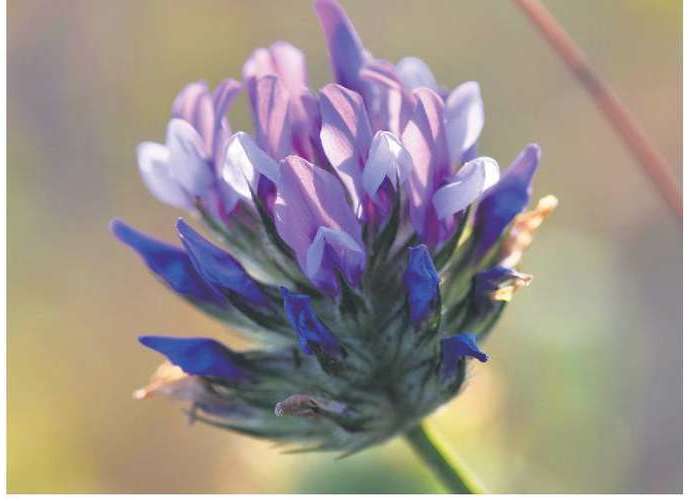 “This plant is chemo-protective, anti-inflammatory, antioxidant and antimicrobial in nature.

This herb is a natural source of natural phytochemicals like psoralen, which are specifically used for skin ailments

Known as a kushtanashini (destroyer of leprosy and skin disease) and raktashodhak (blood purifier), it is commonly prescribed for leucoderma/vitiligo and many skin diseases, including eczema and psoriasis, as well as for respiratory disorders and digestion.

The entire plant is used in Ayurveda but its seeds are especially potent. The Union government has just pushed back on an international company filing a patent for the active ingredient in ashwagandha.