The most difficult thing is the decision to act, the rest is merely tenacity.– Amelia Earhart

The Overseas Deployment of 1TS ships was curtailed due to the COVID 19 pandemic and the ships returned to harbour on 04 Apr 20 after completing a 14-day quarantine period at sea.

For PRELIMS features , specs and this initiative must be noted !

For MAINS do we require more such special vessels for training and induction programme ?

INS Tir, a cadet’s training ship of Indian Navy under Southern Naval Command (SNC) with 14 Naval Wing NCC cadets from different parts of the country embarked, returned to Kochi on completion of Overseas  Deployment of the “First Training Squadron”(1TS).

Sensors on board Tir include Decca Radar and a SATNAV (Satellite Navigation) system.
The cadets also gained immensely from regular interaction with Indian Naval officers as also the foreign sea riders and trainees from Maldives, Seychelles, Bangladesh, Sri Lanka and Myanmar who were also embarked onboard the ship. 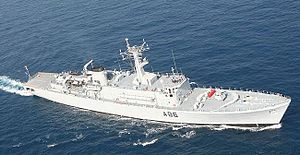 The crew of the ships and NCC cadets are presently undergoing an additional 14-day quarantine period in harbour as a precautionary measure.

For PRELIMS go through the features and significance .

For MAINS look out for its reach and impact !

Empowered Group number 6 is constituted to address the issues pertaining to identification of problems, effective solutions and formulation of plans with three groups of stakeholders:

Further, synergies have been created by linking the specific issues raised by connecting the industry to other Empowered Groups dealing with procurement (EG 3), logistics (EG 5) and several other EGs.

FAQs on Power Grid operations during light out

For PRELIMS let us understand a Maha-ratna company today !

For MAINS can you explain the transmission losses occur during

Power Grid Corporation of India Limited (POWERGRID), is an Indian state-owned electric utility company headquartered in Gurugram, India. POWERGRID transmits about 50% of the total power generated in India on its transmission network.

ALLAYS ALL DOUBTS ABOUT GRID INSTABILITY:

Answer:  Only domestic home lights in the houses have to be put off voluntarily as appealed by our Hon’ble PM. It is again reiterated that no street lights, common area places, hospitals and other essential services have to switch off their lights.

Question 2: Are my domestic appliances safe during the said switching off of home lights ?

Answer: All your domestic appliances will be  safe. There is no need to switch off Fans, ACs, Fridges etc. Indian Electricity Grid is well designed to handle such kind of load variation and has several in- built  levels of control and safety mechanisms to absorb any kind of frequency changes occurring due to such load variation. Thus, all the domestic appliances will be totally safe and hence should be kept in normal functioning mode as per the requirements.

Question 3 : Whetheradequate arrangements and protocols are in place to handle grid stability during light out event on 5th April at 9:00 PM to 9.09pm ?

Answer :  Yes, all adequate arrangements and standard operating protocols are in place to maintain grid stability.

Question 4: Is it compulsory or voluntary to switch off lights?

Answer :   Voluntary . As already  said only domestic home lights have to be put off .

Question 5: Some apprehensions have been expressed that this may cause instability in the grid and fluctuation in voltage which may harm the electrical appliances.

Answer : These apprehensions are totally misplaced. These are normal phenomenon and the Indian Electricity Grid is well designed to handle such load variation and frequency changes as per standard operating protocols.

Question 6 : Whether our grid management and technology deployed will withstand the fluctuation that light out may cause ?

Answer : Indian electricity grid is robust and stable and employs state-of -art technology. It has in place necessary control and protective elements capable of handling such kind of fluctuations in demand at any instant of time.

Question 7 :  Whether appliances like fan, Refrigerators ,  AC, etc should be switched off or kept in the on mode?

Answer : All your domestic appliances would be safe. These appliances should be operated normally as per requirements by the consumers. No need at all to especially switch off at 9pm.

Question 8 : Whether Street Lights will go off.

Infact, all States/UTs/ Local bodies have been advised to keep the street lights on for public safety.

Questions 9: Whether Hospitals or other emergency and important installations will face light out.

Answer : No, the lights in Hospitals and all other essential services like Public Utilities, Municipal Services, Offices, Police Stations, Manufacturing Facilities, etc will remain on. The call given by Hon’ble PM is to just switch off lights in residences.

Question 10: The load of home-lightings alone is around 20% of the total load. Would a sudden disconnect of 20% load not destabilise the grid? What measures will the Ministry take?

Answer : Domestic lighting load is much less than 20 per cent. Such kind of reduction in demand can be easily managed for which standard technical operating protocols are in place.

Question 11: Will there be load shedding ? If yes what will be the impact ?

Answer : No load shedding is planned.

In 1980, the Rajadhyaksha Committee on Power Sector Reforms submitted its report to the Government of India suggesting that extensive reforms were needed in the Indian power sector.

In 1981, the Government of India took a policy decision to form a National Power Grid, which would pave the way for the integrated operation of the central and regional transmission systems.

In October 23, 1989 under the Companies Act, 1956, the National Power Transmission Corporation Limited was formed, and assigned the responsibility of planning, executing, owning, operating and maintaining the high voltage transmission systems in the country.

In October 1992 , the National Power Transmission Corporations name was changed to Power Grid Corporation of India Limited, as we know of it today.

For MAINS the secrets oof low fatality rate have been explained below !

They call them corona taxis: Medics outfitted in protective gear, driving around the empty streets of Heidelberg, Germany, to check on patients who are at home, five or six days into being sick with the SARS-CoV-2 virus.

No magic formula: A medical employee conducting a testing demonstration in Munich, Germany, in March.

WHY IS GERMANY’S DEATH RATE SO LOW?

The virus and the resulting disease, COVID-19, have hit Germany with force: According to Johns Hopkins University, the country had more than 92,000 infections as of midday Saturday, more than any other country except the U.S., Italy and Spain.

But there are also significant medical factors, epidemiologists and virologists say, chief among them early and widespread testing and treatment, plenty of intensive care beds and a trusted government whose social distancing guidelines are widely observed.

By now, there are 40,000 intensive care beds available in Germany.

The Central government has decided to provide free testing and treatment of COVID-19 under the Ayushman Bharat Scheme.

Expanding coverage: States are in the process of enlisting private hospitals to be converted.

These tests would be carried out as per the protocol set by Indian Council for Medical Research (ICMR) and by private labs approved/registered by the ICMR. Similarly, treatment of COVID-19 by private hospitals will be covered under AB-PMJAY.”

The objective of the decision was to increase the supply of testing and treatment facilities and increase access by roping in the private sector through AB-PMJAY scheme as per the ICMR guidelines.